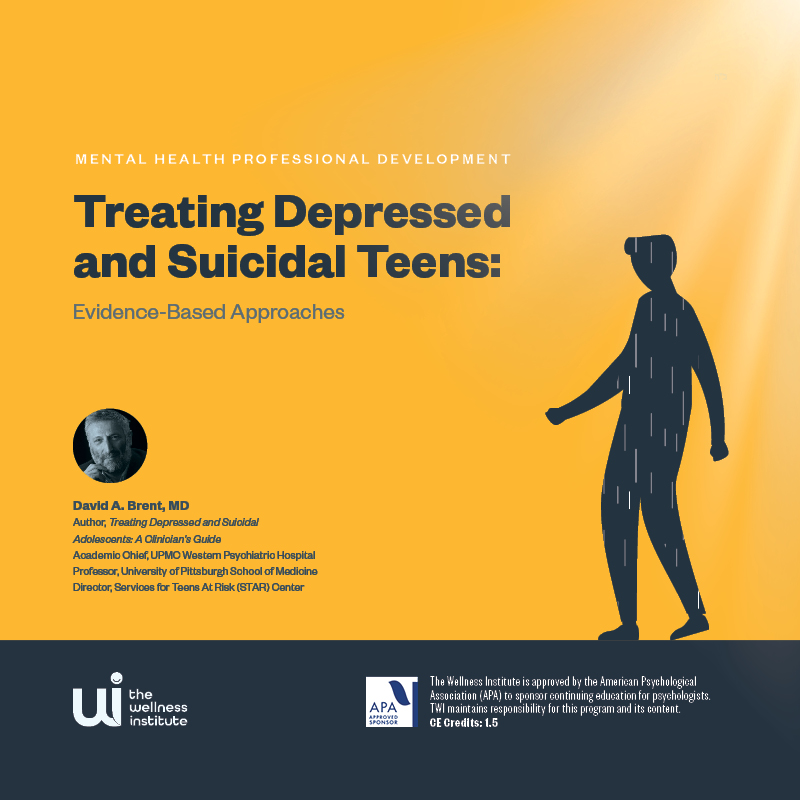 Join us on Friday, December 9, with Dr. David A Brent for: Treating Depressed and Suicidal Teens

A﻿bout Dr. David A Brent:
David Brent is a child and adolescent psychiatrist trained who has worked as a researcher in the area of adolescent suicide for four decades at the University of Pittsburgh, where he is a Distinguished Professor and holds an Endowed Chair in Suicide Studies. His work has focused on the ascertainment of risk factors for adolescent suicide and the translation of those findings into interventions to reduce suicidal risk. In collaboration with many others, he helped to identify the role of mood disorders, substance, and firearms as risk factors for adolescent suicide and has delineated some mechanisms by which suicidal behavior is transmitted in families. He has helped to develop and test novel methods for the assessment of suicidal risk through such diverse methods as adaptive screening, neural correlates of suicidal thinking, and machine learning of health records. David has also helped to develop and test psychotherapeutic approaches to depressed and suicidal youth, including a brief, app-supported intervention to reduce suicidal risk in high-risk adolescents.

David currently leads an NIMH-funded Center, which is a collaboration with over 30 other colleagues, with the goals of enhancing the capacity of pediatric primary care to detect, triage, and manage depressed and suicidal youth, and training a diverse, national cohort of early career scientists focused on youth suicide. He co-founded and has led a clinical program, Services for Teens at Risk, that has treated over 7000 suicidal adolescents and young adults. David led an NIMH-funded research training grant for 3 decades and has helped to train many highly successful researchers and academic leaders.

Make sure to copy Registration number after successful submission.

Thank you for payment.

A division of the Rohr Jewish Learning Institute

© 2021 The Wellness Institute. All rights reserved.

Your ticket for the: Treating Depressed And Suicidal Teens